I’m sure you know how Islam is. You can do one of three things in the tribal agencies. One, you pay jaziya. Two, you embrace Islam. Three, you prepare to die.

That’s Taranjit Singh, a Sikh from Peshawar telling me about how the Sikhs of Peshawar get by. Jaziya is a religious tax that some Muslim kings – most infamously the Mughal emperor Aurangzeb – used to levy on Non-Muslim subject. I’d always thought the practice had died out a couple of centuries ago, but large parts of the North-West Frontier Province, where I am right now, are stuck in an old time warp. Although it falls in Pakistan, Pakistan’s government has no formal control over much of it, especially in the Khyber Agencies, where different tribes (or agencies) control different areas.

“All law is administered by the loya jirgah,” Taranjit tells me. “If we Sikhs want to survive in those mountaneous areas, we have to have a tribal represent us there. We pay him certain money, and he looks after our interests. It is like having a lawyer.”

But it isn’t like a special-interest group hiring a lobbyist, because Taranjit uses the word ‘jaziya’ repeatedly. It’s about religion.

We are sitting in the Gurudwara Bhai Joga Singh, in the Mohalla Jogan Shah Dabgari in Peshawar. We have got here by winding our way through a series of lanes and bylanes, and would have trouble getting out of here without a guide. 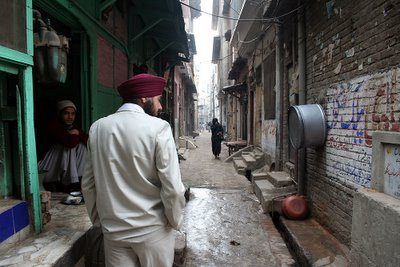 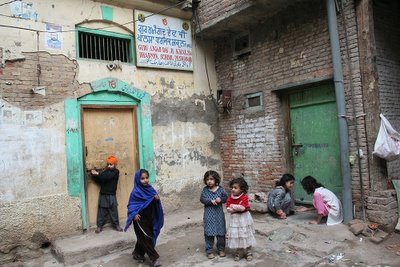 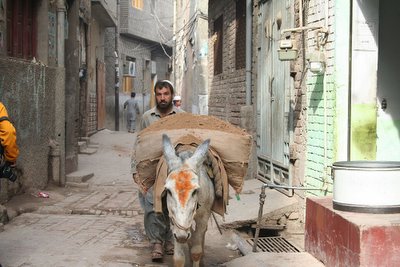 Taranjit tells us about how this gurudwara came to be. “It was founded by Hari Singh Nalwah,” he says, “the general of Ranjit Singh’s army. [The Sikh empire once extended to Peshawar.] Hari Singh Nalwah was said to weigh 250 kgs. He was the strongest man in the universe. Once, he slapped a man and his head got dislocated from his shoulder. His chest was equal to that of seven people.”

“Would you happen to know the name of that horse?” I ask.

Taranjit looks at me oddly. “Horses don’t have names,” he says.

“Anyway,” he continues, “Hari Singh Nalwah built around 2500 gurudwaras in Punjab, under the patronage of Maharaja Ranjit Singh.”

“How many of these exist today?”

“Maybe about 800,” he says. I find later that this figure is hearsay, that it could be less, it could be more. Across the country, in fact, there are ex-gurudwaras that have been converted into schools, jails, homes and suchlike. The religion was almost wiped out when the partition of India took place.

“All the Sikhs either shifted to India or went into the mountains,” says Taranjit. “Only recently have they started coming down from the mountains.” Peshawar has more Sikhs than any other city in Pakistan. Pushto is the mother tongue of most of them.

Taranjit introduces us to Sardar Shona Singh, the pramukh of the gurudwara. “This gurudwara was shut down in 1947,” Sardar Shona Singh says. “Then, in 1980, the Pakistan government gave us permission to start it again. It took us three days just to clean this place up.”

Pakistan’s government, they assure us, is quite “supportable” of the Sikhs. But then, just as we are beginning to think about how the country is slowly becoming more liberal, he tells us about Jaziya. 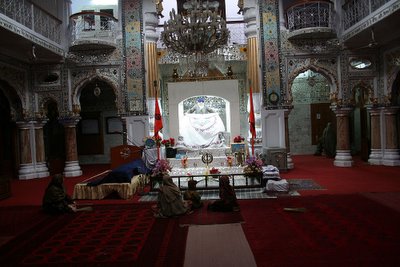 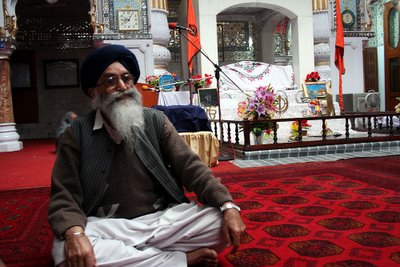 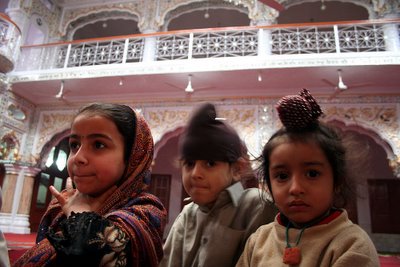 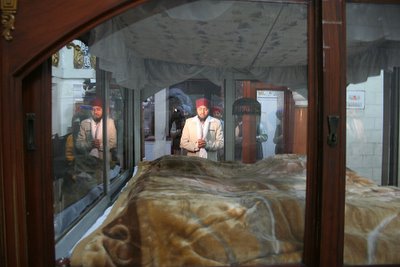