Today was one day on India's tour of Pakistan that was supposed to belong to the media. The Indian team management announced that there would be "a media interaction" today. What generally happens at these is that players sit around the room in separate groups of two or three, and journalists wander around asking questions to whoever they feel like. Most journalists come prepared with particular questions for particular players, with story ideas in mind.

But on landing up at the venue, we discovered that what had been organised was just a big press conference, with all the players slated to be sitting side by side, as the journalists asked questions, one by one, to whoever they felt like. This meant that everyone would have all the answers, and no one would get any exclusive quotes, or be able to compile quotes for specific story ideas. 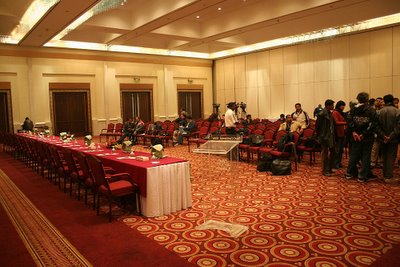 Needless to say, the journalists were pissed, and some spiritedly spoke of a walkout for taking the press for granted. But they stayed, and waited, as the players arrived. As they sat, the photographers milled around in front, taking pictures. 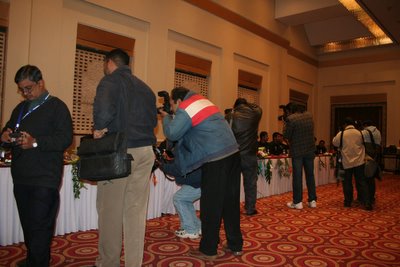 Well, we all know the price of fame, but the first time this happens to a player it must feel damn odd. You come, you sit, and then for two minutes people are just taking pictures of you. What expression do you make? You can't smile for the cameras, that would be cheesy. In fact, you're worried about appearing too conscious -- even though at first you certainly are -- so you chat with the fellow besides you, or just look down and appear preoccupied, or look around the room casually. If you're an old pro, it must begin to grate after a while. 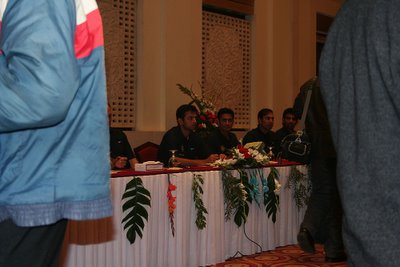 I sat in the front row with my camera, and I found it fascinating to watch the players all through the PC, seeing their changing expressions. Consider the picture below, for example: doesn't the expression of each man tell you something about his general state of mind? 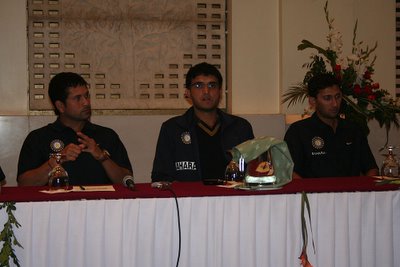 At one point, Raj Singh Dungarpur, the team's manager, got Wasim Jaffer's attention and pushed his glass towards him. He wanted Jaffer to pour water into it. Jaffer politely obliged. 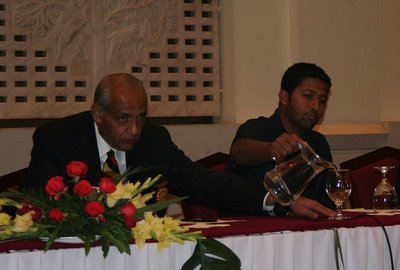 And below, check out the expressions on the faces of some of the Indian team and their coach as Sourav Ganguly answers a routine question about how it feels to not be the captain of the side. 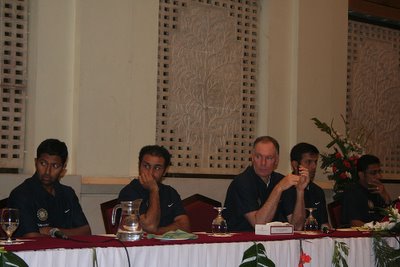 Later, Rahul Dravid is asked a question about Ganguly, and all the cameras, as Dravid answers, are pointed not at him but towards Ganguly, sitting in a corner. (The question was whether Ganguly was in contention to play in the first Test. Dravid diplomatically said that everyone in the squad was in contention. Rubbish!) 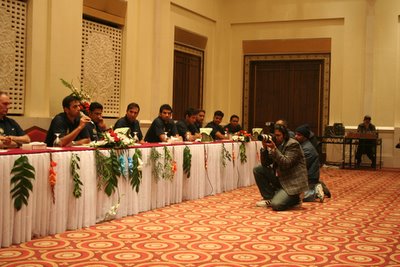 Many of the journalists, peeved at the way the event was organised, refused to ask questions. That led to some uneasy silences. 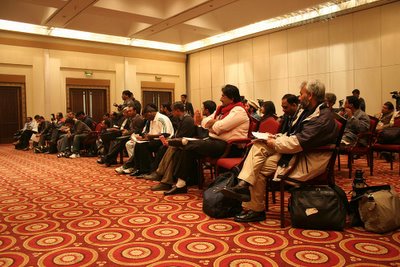 After the print media was disposed off, it was the turn of the electoric media. As each TV channel had just one or two mikes, and not the 13 or 14 required to cover the breadth of the room, the players spoke to them in groups of two or three. Why not us? 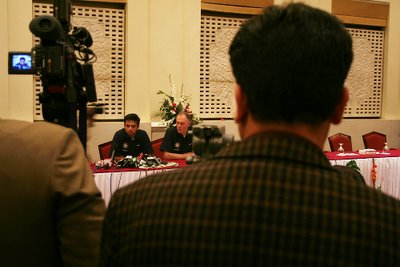 (Click on pictures to enlarge. All pics posted on this blog during this trip are by me, unless otherwise attributed.)
amit varma, 3:00 PM| write to me | permalink | homepage