When one travels, and writes, it is hard to keep one's balance. At home, in our cities, we walk around enclosed in the cocoons of our own world. But in a foreign land we look for significance, for beauty, for exotica, in every little thing we see. Every dustbin appears picture-worthy, street signs demand posterity, and buildings, windows, awnings, the way people dress and talk, even stray dogs appear remarkable. This is not a bad thing, of course: we view things in a fresh way while the locals are perhaps jaded, taking their cities for granted. But it leads, in too many cases, to a false glorification of the ordinary, to exaggeration, to creations of parallel cities that exist only in the mind.

I had decided when I came to Lahore that I would guard against this in my own writing. But how can one not be overwhelmed by Cooco's. Cooco's is a restaurant in Heera Mandi, Lahore's red-light area, to which a Lahori friend took four of us yesterday, and it is a place of which I've read a fair bit, and had wanted to visit. Cooco's is owned by Iqbal Hussain, a painter whose mother was a nautch girl, like others in his family. He grew up in Heera Mandi, and might well have ended up in the underworld had he not discovered painting. Starting out in 1971, Hussain began painting the people he had grown up with: the prostitutes and thugs of Heera Mandi. His work wasn't easily accepted in Pakistan, where his choice of subjects did not find approval.

I intend to meet up with Mr Hussain soon -- he was out of town today -- and I shall write more about his work and Heera Mandi later. For now, let me just write about the restuarant. Cooco's is located in a haveli where the restaurant is at a couple of levels on the rooftop, which one reaches by climbing a long and winding staircase. The kitchen is on the streetside below, though, as shown in the first picture below. Cooco's waiters stand at the edge of the terrace above them and use a pulley-system to lift food up (that's what the guys in the foreground of picture 4 are doing). And the setting is remarkable: the Lahore Fort is just besides Cooco's, magnificently lit up, as if announcing to the skies that this is the center of the earth. And the Badshahi Mosque inside, with its green domes, is quite as aweinspiring as religious monuments are ideally meant to be.

It isn't just the exterior but the interior which is breathtaking. Downstairs, there are paintings by Hussain all over, of the chisselled faces of the women of Heera Mandi with deep sad eyes and a dignity in their bearing. Upstairs, there are statues of Ganpati and Mother Mary, among others. The walls, the tiles, the furniture, everything evokes the magic of an era as if it is still alive and flourishing. So do the Jagjit Singh ghazals that are playing, though my local friend notes sadly that Mehdi Hassan would have been more appropriate.

The food is astoundingly good, but my words would not do justice to it, so here are some pictures (click on them to enlarge): 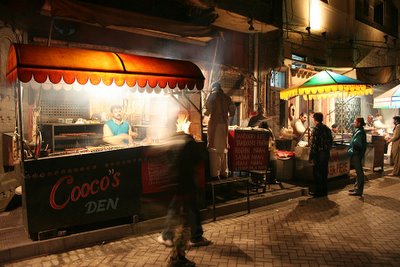 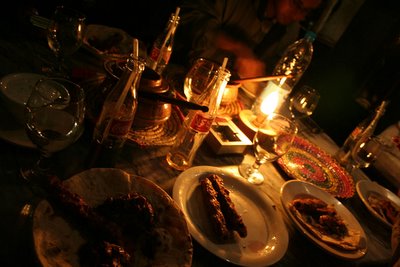 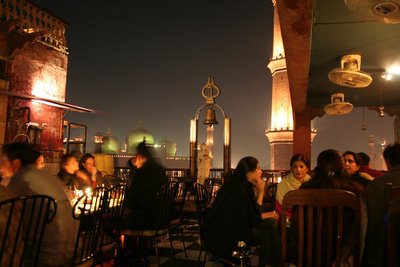 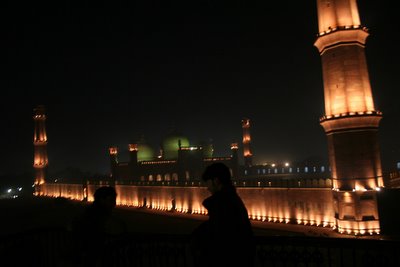 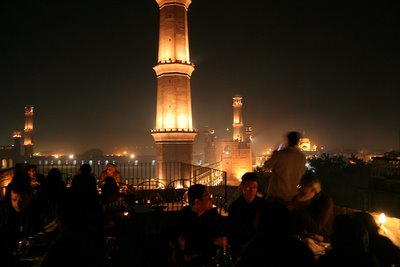