Of Salim's kababs and Bappida's mudpie

"No better tourist guide doth walk upon this earth than a youthful blogger," Samuel Johnson once said (ok, he didn't, but he could have), and I found out the truth in this bit of ancient wisdom while walking around Khan Market in Delhi with Jabberwock a couple of evenings ago. We were going to an ice-cream joint called the Big Chill (more on it later), inside a gully on the side of the marketplace. On the way, he pointed to what looked like a mechanic's shop and exhorted me to try the kabab rolls there sometime.

"As you command sire," I replied with characteristic humility.

So the next day I felt hungry and returned to the gully. Most great kabab joints can be identified from far away. There is a look that goes with them: large ovens with many skewers, sidey characters all around, smoke rising gently, and the smell, such aroma! All of these were entirely missing from the utterly nondescript Salim Kabab Corner.

And yet, what food! Their Mutton Seek Roomali Roll [sic], especially with a double portion of seekh, is highly recommended (by me, though Mr Johnson would certainly have approved as well), with the juicy taste and chewy texture of meat cooked fresh and just right coming through unhindered by the taste of too much masala, which spoils many kababs. Yummacious.

Here's a picture of the place: say hi to Khurshid, Javed and Kamruddin when you go there. 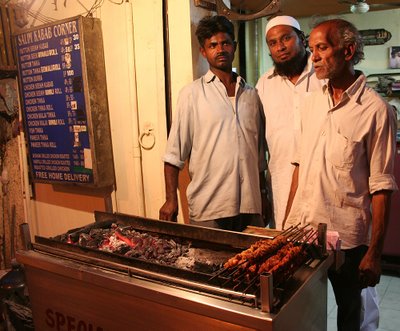 And then, of course, there's The Big Chill. A friend in Mumbai -- stand up, George -- had effusively gushed (as opposed to non-effusively gushed; such a bad writer I am becoming) about the Mississippi Mudpie there, which is pictured below, and which I thoroughly enjoyed. Anything with chocolate sauce is divine, frankly. 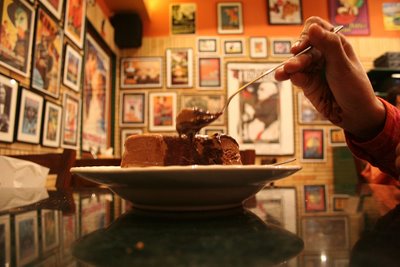 While travelling through Pakistan earlier this year, I'd gone to dessert joints in both Lahore and Karachi that were just like this in terms of menu and decor: vintage Hollywood posters, especially of noir and B-Grade horror films, all around the walls. It's an interesting restomeme, if I may coin a neologism, but why not try an Indian theme? Mithun posters on the wall, Laluji ke samosay on the menu, and Bappi Lahiri imitation gold necklaces available as merchandise. Such fun would result, and I'm sure it would be a hit.

As Bill Shakepeare once said, "Heaven hath no fun like Bappida in a thong." Well, ok, never mind!

Update: Here's an interesting comparison of food in Delhi and Mumbai on the blog of a new friend of mine, who divides his time between these two cities.
amit varma, 11:53 AM| write to me | permalink | homepage