After an interesting afternoon spent listening to qawwalis (chronicled here and here), Swati, Furqan and I head on over to Regale Internet Inn, from where Malik is going to take us to the famous Sufi night, which takes place every Thursday at the shrine of Baba Shah Jamal. There are two quadrangles in this shrine: In one, the famous Pappu Saeen plays dhol, while in the other, Goonga Saeen and Mithu Saeen play dhol. (Goonga is deaf!) These chaps play furiously for hours, and in the middle of their performance, dervishes come and spin around madly, as the audience gets high on the music, the spinning and lots of charas and suchlike.

As we are on our way, Swati gets a call from Malik, who says that a French Television crew will also be there, and they have paid 50,000 Pakistani rupees to Mithu Saeen to see him perform. To avoid the possibility of him demanding money from NDTV, Malik has told him that we are students from the National College of Art in Lahore. This alarms us a bit, and we wonder if it is necessary. Then we reach Regale Internet Inn and meet Mithu Saeen. 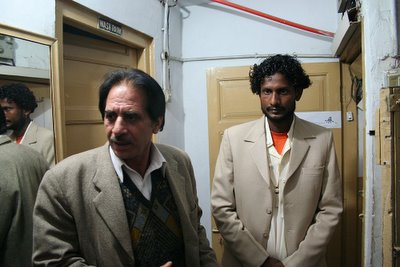 Mithu asks Malik gruffly if there is any money in this for him. Malik tells him that we’re just students. He looks at us suspiciously. Malik diverts his attention by asking him to show the money he’s been given by the French team. He takes out a bundle of dollars from his pocket. He looks at the money, and then at us. (My still camera isn't an issue, but as I'm with Swati and Furqan, I'm seen as part of the TV crew. In any case, I do want the guys to get their story.)

Malik hustles and bustles us out the door, and we drive down to the lane where the shrine is located. 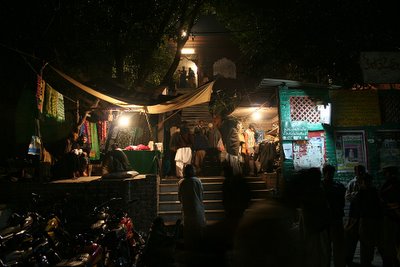 Before the event, the dhol players and a few hangers on sit inside a smoky room by the road, as we wait outside. Swati contemplates the meaning of life while Furqan contemplates the camera. 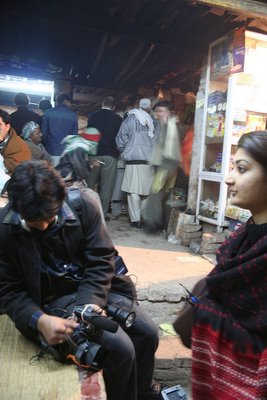 Then we head inside the shrine, shoes in hand, jostling through a busy bunch of people. As the evening proceeds, I realise that the audience consists of essentially two kinds of people: some foreigners who are here for the exotica; and many localites who are here to dope and space out. We don’t dope, so you know which category we’re in. 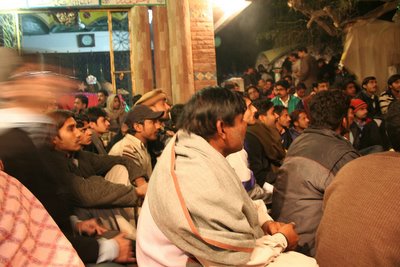 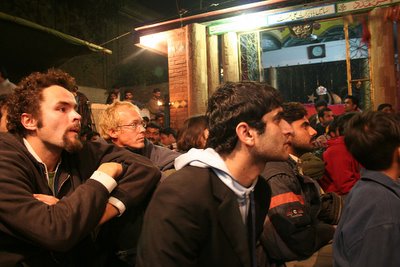 Goonga Saeen and Mithu Saeen then get going on their dhols. It’s percussion played at a furious pace, with a hypnotic rhythm to it that would numb the senses if you succumbed to it. They play incredibly well together, and Goonga seems quite at ease, while Mithu often seems to be hard at work, concentrating intently. They’re perfectly in synch all through, though, and this is probably dhol heaven for those who have a taste for the stuff. (I don’t think I do, I must confess.) 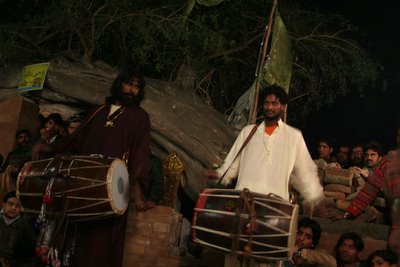 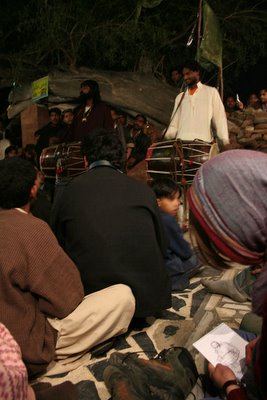 After an hour or so of frenetic dholing, the crowd at the front moves back, and dervishes take the floor. The place is abuzz now, and people are already lighting up. 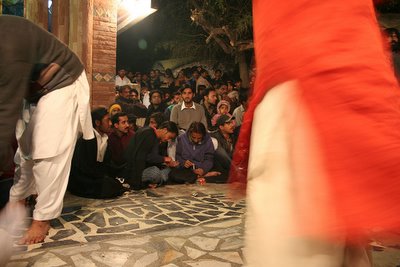 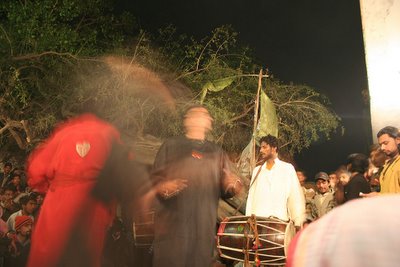 Don’t imagine that NDTV is doing nothing. Furqan is also spinning madly in his own way, taking shots of this and that and everything else. 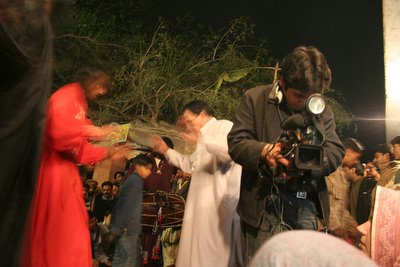 Later, when we’ve had enough, we take Malik out on the road for some soundbytes. 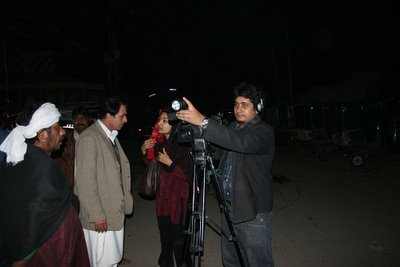 I take photographs, and the one below is an apt one when you consider that the location is just outside a Sufi shrine. I’d set exposure to the levels of the street, but Malik had a camera light trained on his face, and it made him look as if he was an otherworldly body of light. Such fun. 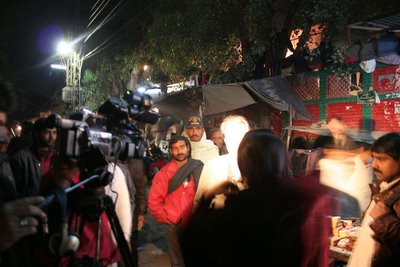 As Malik is finishing giving his bytes, I hang around at the other side of the street. A couple of chaps then come and stand menacingly from either side of me. “Are you from India?” asks one of them.

I’m suddenly a bit worried, given the crowd that hangs around here, and the way these guys are looking at me. “Er, yes, I say.”

“And are you Muslim?” asks the chap, a touch of menace in his voice. I’m suddenly, for the only time on this delightful trip and just for a few seconds, terrified. “Yes,” I reply. He asks me my name. I reply: 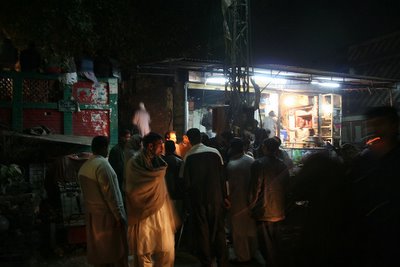