Scenes from a stadium

Damn, these tours are so tiring. Normally, during cricket tours, one gets time to work on pieces in the press box during the day, but because of my hourly radio updates for BBC, at which I'm sort of struggling, I don’t have time to work on anything else. And by the time I finish my daily Guardian report in the evening I'm rather tired and unfresh. So I have loads of material collected from Lahore, but no time to write the features I’m planning. Hardly any time for blogging, either, though I did get a few posts about Lahore done over the weekend. So, until I find more interesting things to blog about, here are some pictures from the ground.

First, the press box. It’s just over a right-hander’s long-off at the Golf Club End and is open at the front. The view from it is great, but the sunshine at the front sometimes gets a bit harsh, and I can barely work on my laptop in the first half of the day because I can’t see anything on the screen. For those who don’t have laptops or haven’t taken telephone lines, there are a few computers at the back of the room where one can sit and surf and file. 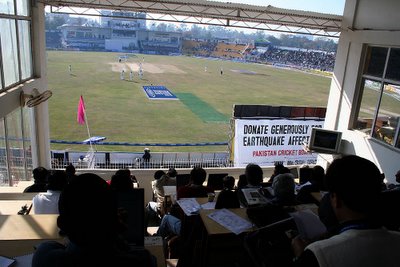 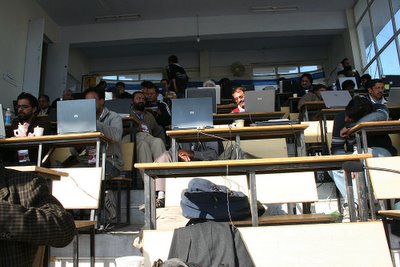 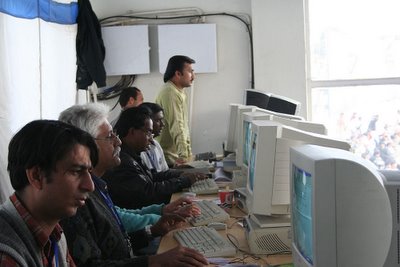 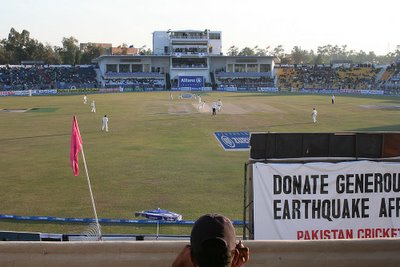 The most important person in any press box, bar none, is the scorer. At every dismissal and landmark he sits down and reels off the relevant stats on his microphone: so many minutes, so many balls etc. He also has a walkie-talkie to communicate with scorers in other parts of the ground. He has to watch every single ball. It’s a heck of a job, and in many places voluntary or very poorly paid. Most scorers do it just for the love of cricket, to be a part of the game they love. 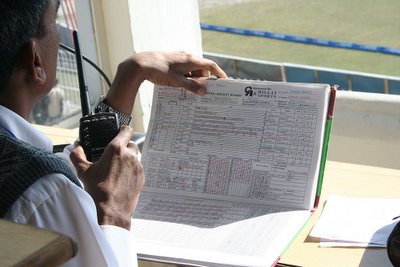 Faisalabad may be a sleepy town, but the crowds here rock. We’ve had a packed house from the second day onwards, and not only do they have a lot of fun, they’re also very bipartisan. Yesterday, when Rahul Dravid was on 99, slow handclaps urged him to his century and loud applause greeted the shot that got him there. There was loud spontaneous applause today when Yuvraj Singh pulled off a diving save. At one point today, when the grizzled occupants of the press box were close to sleep, a section of the crowd entertained itself by throwing a man up in the air again and again, presumably with his consent, as if it was a Pearl Jam concert. Fun came. 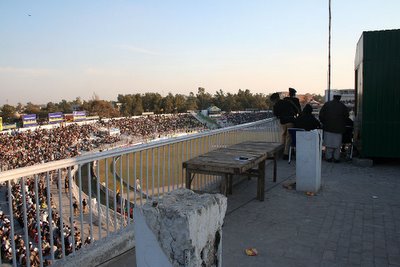 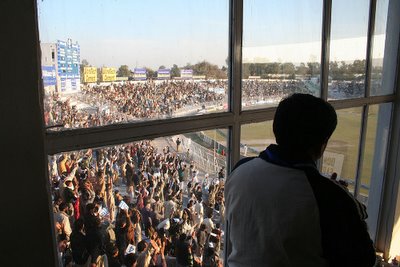 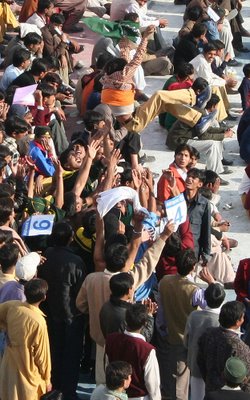 Sometimes I feel so old and cynical, and nothing seems to excite me. And then I think of the childlike joy with which I once watched the game. It comes sometimes, in fleeting moments, and then it passes, as all things must and all that. 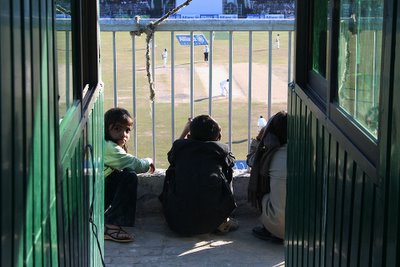 After the game, there’s a press conference in front of the sightscreen at the other end of the stadium. We walk across the ground, over the same turf where for hours today these men have done battle. Often, the players do cooling-down exercises on the ground, and an enterprising television journalist will invariably take the opportunity to use that as a background for his piece-to-camera. Apart from the main presser, some persistent journalists often get a quote or two from a coach or player standing by. 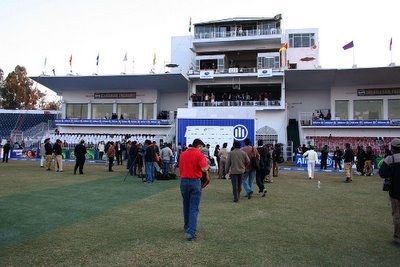 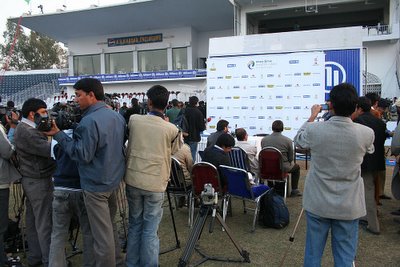 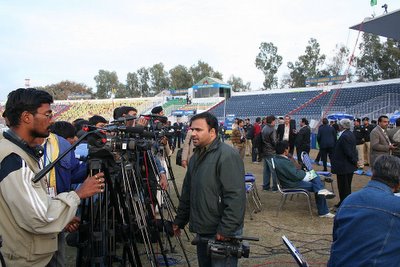 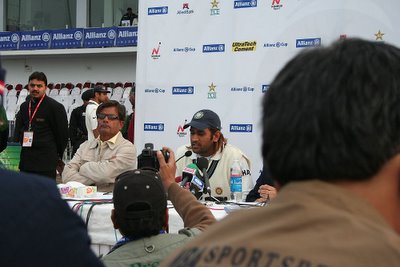 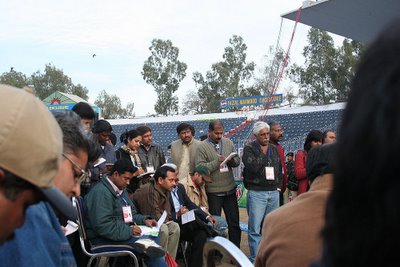 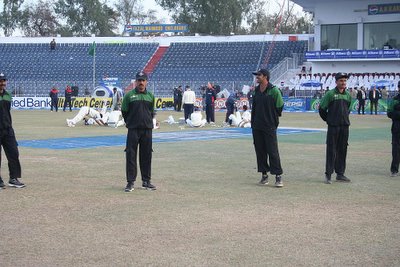 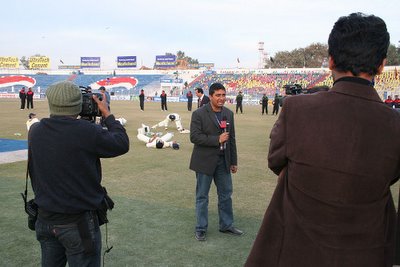 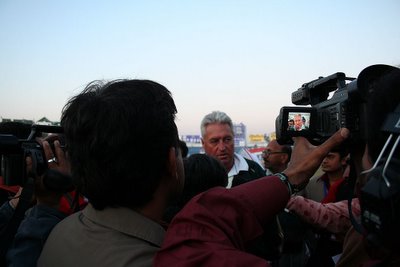 I like the way the ground looks in the evening: as journalists finish their copy in the press box, a tranquil calm descends on this fierce arena. (Well, look, it’s supposed to be fierce, but with a pitch like this…) 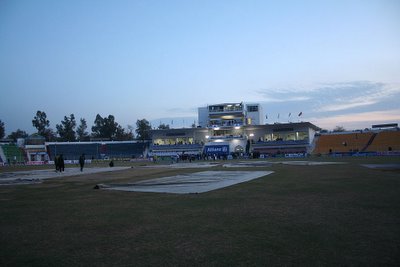 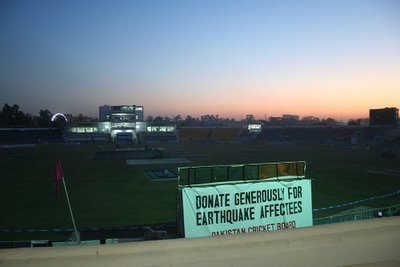 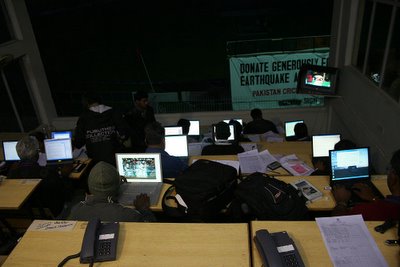 The Indian team doesn’t have much of a chance to catch the sights. A ring of security escorts them from ground to bus to hotel. Such is international cricket. 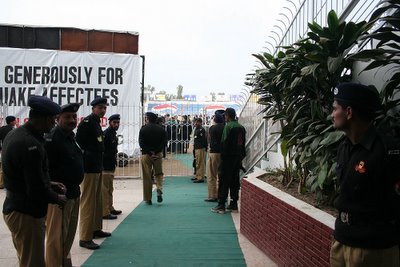 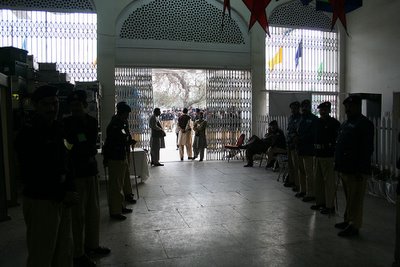 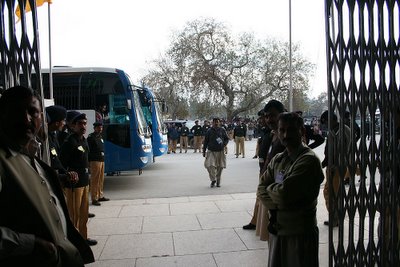 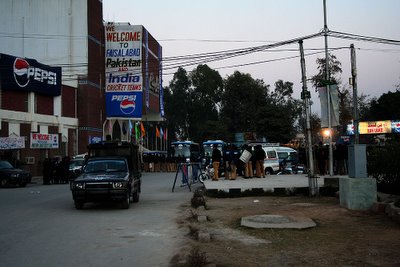 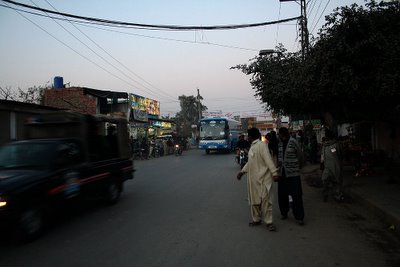