I don’t do many interviews, but very few journalists I know have conducted interviews at 2 in the morning. I had wanted to meet Rahat Fateh Ali Khan while in Faisalabad, but couldn’t make the time to do it during the days, when I had to be at the ground reporting on the cricket. His manager eventually told me that I could meet him on the evening of the last day of the game, and I was to call him in the evening. When I called him at seven, he gave me a time of 11 pm. Delays happened until I finally met the manager, Rahat’s ‘mamu’, an exceedingly pleasant gentleman named Khushnood, at around 1 am. He then insisted that I have kababs with him before we go to meet Rahat, but ordered the cook, who was roasting them on a platform by the street, not to reveal the recipe when I asked him which masalas he used in making them. 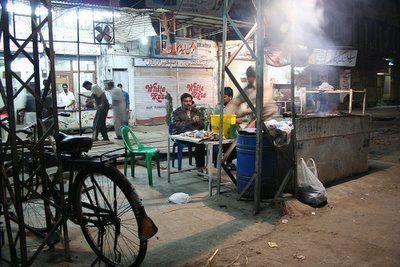 I was a little surprised at the timing of the interview, and asked him if Rahat would be awake now. “Oh yes,” he remarked, as if it was a ridiculous question to ask.

“Around 10 in the morning,” he said. My eyes fairly goggled at this. Khushnood explained, “You see, he is busy giving live performances that generally happen all night. So he has to catch up with his sleep during the day.”

We proceed towards Rahat’s house, and on the way, at my request, he shows me the places where Nusrat Fateh Ali Khan

, Rahat’s uncle, was born and lived and gave his first performances and so on.

(I’m reproducing snippets of my long chat with Rahat below. I needed to meet him for a longer piece I’m trying to write on qawwali music in Pakistan, and I won’t really structure this stuff out and write a piece and so on – blogs don’t demand that formal structure.

A brief backgrounder: although Rahat is in the news in India these days for ‘Jiya Dhadak Dhadak’, that superb song from Kalyug, he’s had a fairly good international career so far. He joined Nusrat’s troupe in the mid-80s, when he was just a kid, and rose to being his main side singer in the 90s. He performed with him on quite a few of his albums, and after his death in 1997, became the main singer in the group. He sang for the soundtrack of the film Four Feathers 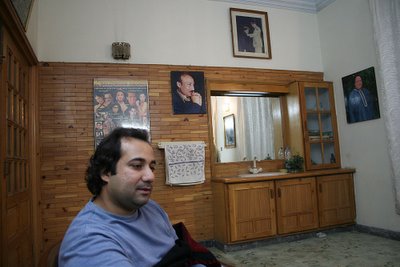 Rahat greets me in a casual and friendly way when we meet, and orders tea. We are in an outer room of his house that is full of pictures of Nusrat Fateh Ali Khan – both portraits and from performances. We start off by speaking a bit about his family and how he started learning music – as you’d expect, as a kid.

Born in 1973, it was in 1980, at the age of seven, that Rahat performed on stage for the first time. It was on an occasion to mark the 15th death anniversary of his grandfather, Fatel Ali Khan, and eminences like Bade Ghulam Ali Khan, an early idol of Rahat’s, and Nusrat himself were present.

“So how was your performance received?” I ask. 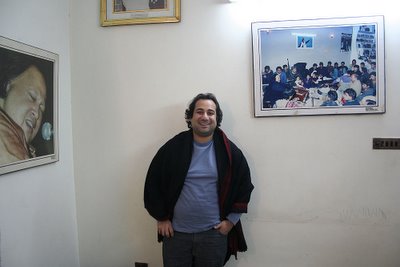 By the time Rahat joined his uncle’s troupe, in the mid-1980s, Nusrat was already a virtual legend in his own country. He was also a much criticised man, and the reasons for both the laudings and the lashings he received were the same: what he did with the form of the qawaali.

“Unhone ek guldasta banaaya,” says Rahat. “Usme qawwali, thumri, ghazal, muktalif kism ki musical forms ko shaamil kiya.” Nusrat made a bouquet of musical styles, but unlike what the purists say, he did not compromise while doing that. “Everthing he did retained the flavour of qawwali,” says Rahat. The essence of his music, in other words, drew from the same spiritual yearning that marks out qawwali music.

One of the biggest gripes around Nusrat – and, indeed, against Rahat today – is that he demeaned qawwali music by taking it out of its original setting of dargahs and suchlike, and into marriage functions and Bollywood. I ask Rahat about that, about how one can reconcile the original intent of qawwali as a spiritual tool with its use today for entertainment.

“You can listen to every qawwali in two ways,” he tells me. “When we sing of ‘sharaab’ and ‘suroor’, you can take the meaning to be either literal, or a metaphor for something spiritual. It depends on the person listening to it, not on the setting.” 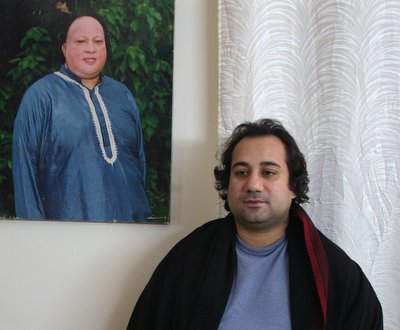 In 1985, Nusrat performed at a festival in Cornwall, and that is where the West sat up and took notice of him. As the years went by, collaborations, albums and concerts followed, most notably his remarkable series of albums with Real World.

“Did he adapt his music for Western Audiences?” I ask Rahat. “Was there a difference between the music he performed in Pakistan and that abroad?”

“There had to be,” says Rahat. “The music he performed abroad had much more of classical content. Foreigners didn’t understand our language and our lyrics, so the music had to work harder.”

Also, if I may speculate, foreigners unused to classical music were likely to be far more impressed by meandering alaaps than local audiences, who had seen plenty of that stuff, and whose expectations from the music were often different. In other words, Nusrat perhaps played to his Western audiences a bit, gave them the exotica he craved – but always without compromising the essence of his music.

I ask Rahat about Star Rise

, the Real World compilation of some of Nusrat’s music remixed by stars of the Asian Underground. It’s the only work featuring Nusrat’s voice that I simply can’t stand, and I ask Rahat what Nusrat thought of such remixes. Rahat laughs. “Nusrat hated it,” he says. “He felt they had destroyed his music.”

I ask him about his album, Rahat

, which was produced by Rick Rubin and released by Sony in 2001. “Your voice sounds very different in that than it does in some of the stuff you’ve recently done,” I say, “like ‘Jiya Dhadak Dhadak’. Why is that?”

Rahat laughs. “Rick came to me and he said that he wanted to use these four tracks that I’d recorded in 1996. I told him that I’ve changed since then, I’m a different singer now. I offered to sing those same songs for him again today. But he insisted on using those songs, he said that that is how he wanted to project me.”

“And how have you changed?” I asked.

“Could Nusrat do it.”

“Oh yes.” Rahat smiles, remembering. “He could do anything.”

Rahat has performed with Eddie Vedder at the Central park in New York, and with Pearl Jam at the Shrine Auditorium in Los Angeles, where they performed “Long Road” together, the song from the soundtrack of Dead Man Walking

, for which Nusrat had collaborated with Pearl Jam. Rahat had participated in the recording of that.

“The recording was in a small room, not the kind of big studio we had expected. And when these guys came, holding guitars, we thought they must be musicians. I was surprised when Eddie started singing while recording, I had thought till then he was just a musician, playing guitar.”

“And how did you find his singing?” I ask.

“Oh, when he started singing, I couldn’t make anything out, we all had headphones on. But later, when I heard the track, I was amazed. He sounded so good!”

There is fierce competition among qawwali singers, Rahat tells me, which comes through in the format of the performances.

“When a group performs,” says Rahat, “it is understood that it doesn’t get up as long as the audience wants it to go on. So if two groups are scheduled to perform on one night, the first one will try to make sure that it pleases the audience, so that the second one can’t get on stage.

“So many times,” he continues with a smile, “Khansaab would perform so well that the people scheduled to perform after him never got a chance to come on stage.

Rahat isn’t just a singer, an interpreter, but also a composer, a creator. “I compose around 30-40 songs every year,” he tells me.

“Do you keep audiences in mind when you do this,” I ask, “or do you just create the kind of music that makes you happy?”

“Oh, I have to keep audiences in mind,” he says. “For example, if there is a fashion for Raga Bhairavi, I’ll sit down with that and create songs in it.”

After composing his music, Rahat tests them out among audiences. He gives between 20 to 25 live performances every month, and he plays his new songs at the concerts. “The ones which receive a good response stay in my repertoire,” he says. “The others I just drop. One has to go down to the level of the audience.”

“Can’t you lift the audience to your level?” I ask.

Just before I leave I ask him if he would have been such an accomplished musician if he wasn’t from this family.

“No,” he says emphatically. “I would have been just another ordinary singer.”
amit varma, 3:12 PM| write to me | permalink | homepage