Every Thursday afternoon, qawwali singers from around Pakistan gather at the shrine of Data Ganj Bakhsh Hajveri to perform. Nusrat Fateh Ali Khan has performed here, and it is said to be quite an experience. I hadn’t had the time to go here on my first Thursday in Lahore, and most of my fellow journalists would be in Faisalabad by the second Thursday – with the second Test starting on Saturday, then needed to be. But I decided to stay back.

Then I ran into Swati Maheshwari of NDTV, who was in Lahore to do features. She wanted to come along for the qawwali afternoon, and I decided it might be fun to do a photo-narrative of how a TV crew shoots such stories, while also, hopefully, getting enough material for my own stuff. (All pics here shot and uploaded with permission.) So I fixed a time with the gentleman who had so kindly agreed to be my guide for the day: Mr Malik of the Regale Internet Inn. (Do note that Malik never asked for money and we never offered. His generosity for us flowed naturally, and we didn’t want to cheapen our gratitude for this fine man.) 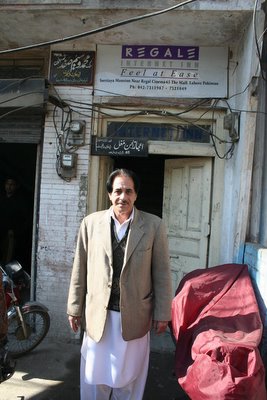 After we arrived, he told Swati, “young lady, you need to wear a shalwar-kameez at the shrine. But no problem. Come with me.”

He took us upstairs to a room by the terrace in which there were many shelves full of the stuff. He started pulling dresses out, saying, “Take any one you want, they’re all new.” Swati said she’d rather change at home. (Eventually Malik said it would be okay if she just covered her head and came.) 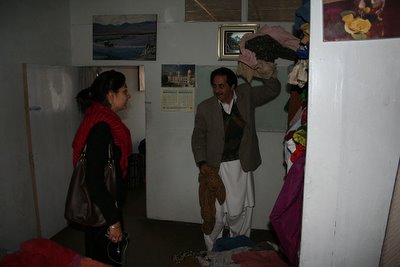 Print journalists like to complain about how poorly paid they are, and TV journalists often complain about how hard they have to work. (Bloggers work hard and aren’t paid at all.) I’ve spent five years in television, though not in news, so it wasn’t a surprise to me to see that as I chilled in the car, Swati was already hard at work, checking her equipment – much of which was misbehaving – and briefing our cameraman, a friendly Lahoreite named Furqan. She had to make sure that she got all the shots she needed for her piece -- establishing shots, background shots, soundbytes, etc. All day, she'd be constructing the narrative inside her head. (Bad phrasing -- where else would construct it, in her liver?) Furqan leaped out of the car when we arrived, set up equipment, and started taking shots of the exterior, of Malik and gang – he had some foreign backpackers with him – entering the shrine, and so on. 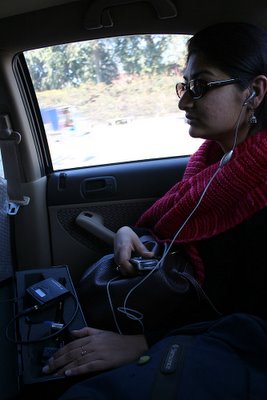 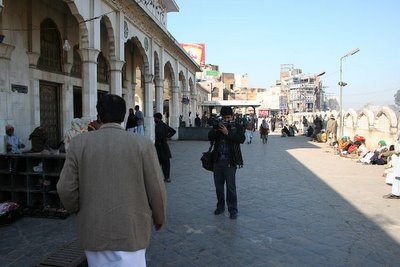 The performances took place in a large, clean hall in the basement of the shrine. There was lots of space when we entered, but it filled up later as the afternoon went on. As in rock concerts, the best-known artists play last. Swati and Furqan set up their equipment, and Furqan spent the next hour or so shooting the performances, and the crowd, from lots of different vantage points. From all this footage, you are likely to see just a few seconds when the piece finally airs. 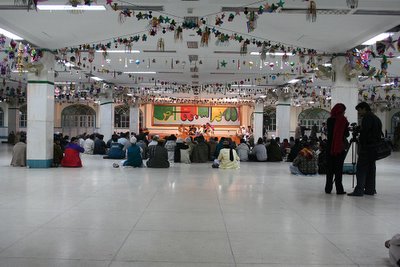 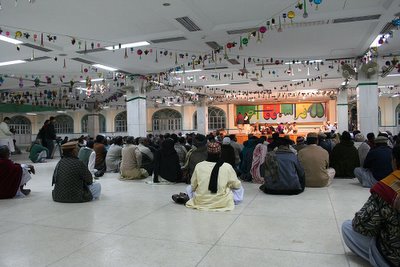 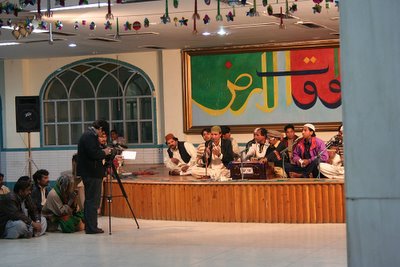 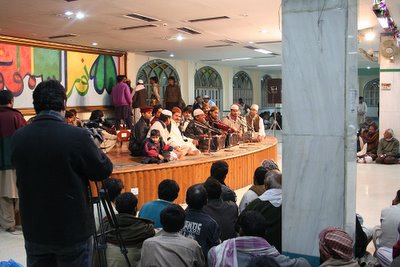 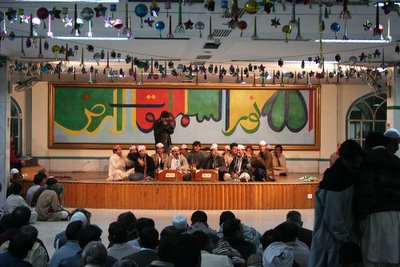 The sound system these guys were using was awful, but some of the performances were pretty good. You might imagine from listening to Nusrat that each qawwali troupe will have one main singer plus chorus, but all the groups I heard that day had two or three main vocalists. The dynamics within each group were fascinating: if one guy had energy and fire in his singing, another had a soothing voice – they would harmonise, play off each other, and move into impassioned choruses. The interplays were fascinating – and so was the way these chaps interacted with the audience. 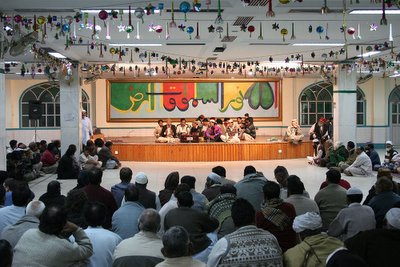 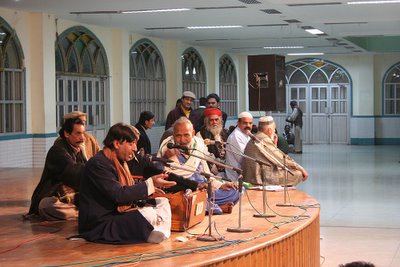 The presence of TV cameras do strange things to people. One chap, when he saw Furqan shooting the singers, went in front of the stage and started performing for him. We must get get this guy to a cricket match, I thought to myself. 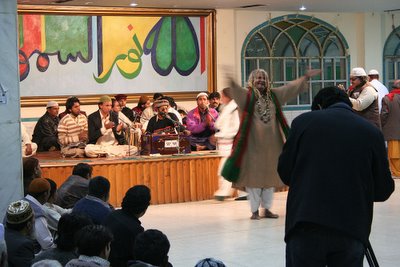 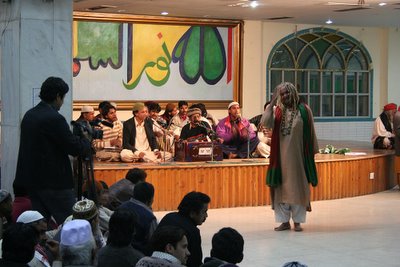 In an afternoon of two halves, this was the first half. And then we met Badar Ali Khan. More about that in the next post. (Update: this post.)
amit varma, 9:26 PM| write to me | permalink | homepage