I never realised normalcy can be overwhelming, but when your expectations are of things out of the ordinary, the normal can surprise. One has heard so much about Karachi: unsafe city, teams don’t like to play here, don’t go out at night, yada yada yada. Well, at the risk of generalising, the city doesn’t seem unsafe to me at all. Last night I was out till past midnight with a charming Karachi couple, Mr and Mrs Teeth Maestro, and it felt like driving around in Mumbai or Delhi with old buddies. (And ah, Karachi’s much-spoken-of similarity to Mumbai is only in terms of weather; otherwise, the city sprawls serenly, and the roads are wider than even Delhi’s. Much rockacity.)

One does see a lot of cop-type people on the streets, but otherwise it doesn’t feel unsafe at all. It bustles and hustles and throbs and robs bobs, and immense fun can be had. Especially if you like movies. Many fine DVDs were bought at a fine place recommended by many noble souls, all at 100 Pakistani rupees (around 70 India rupees each). Take that. 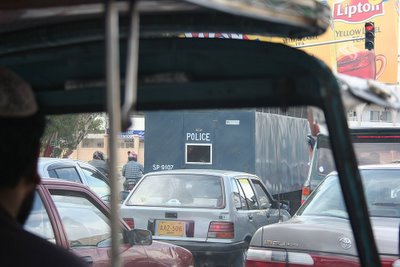 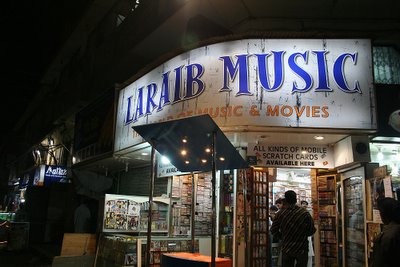 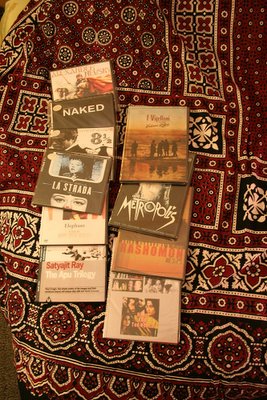 (The DVDs above are photographed on an Ajrak presented to me -- all Indian journalists there got one each -- at a function at the press club. Joyful hospitality. Some Indian journos would have preferred booze, but not being much of a drinker myself, I was satisfied.)

At the Stadium today morning, I met up with Abdul Wahid Khan, the assistant inspector general of Sindh Police in Karachi, and Javed Ali Mahar, an assistant superintendent of police. Mr Khan was a fine, jolly man, reminding me of the onetime MD of Wisden in India, Yajurvindra Singh, both in the way he looked and in his easygoing nature. He was serious when it came to work, though.

“We have over 1500 people manning the stadium,” he told me. “We have close-circuit cameras that will capture images of every single person entering the stadium. We have yada yada and blada blada and gadda gadda. [In other words, many impressive details were given which I won’t bore you with and, wink wink, I don’t remember.]"

Afterwards, I also went and checked out the police control room. Colourful, as you can see below. 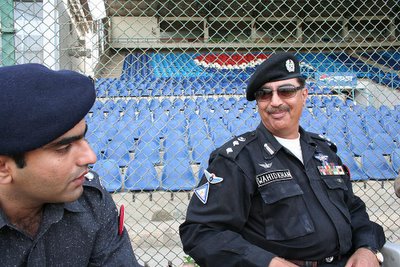 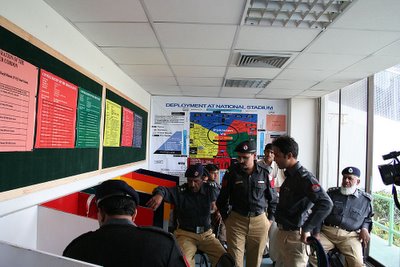 I asked Mr Khan about Karachi, and why people thought it was an unsafe city.

“Propaganda,” he boomed. “People who want Pakistan to do badly spread these lies. Karachi is a port city, and the stock market is booming, and they want to scare people away from here so that Pakistan does badly. But it is all untrue. Go out and see for yourself if it’s dangerous.”

I nodded wisely, having gone out the previous night and duly generalised. While I agreed with Mr Khan that people have the wrong impression of Karachi, I didn’t agree that there was conscious propaganda behind it. In fact, it is a common phenomenon for outsiders to believe that cities which have seen some terrorist activity are less safe than they actually are. I spent the first 12 years of my life in Chandigarh, and part of those years coincided with the terrorism in Punjab. I remember how outsiders then thought the city was terribly unsafe, but the residents felt no such thing.

The reason for this is the way the media functions. In such cities, all the crime, all the terrorist attacks and so on make news. Normalcy obviously doesn’t. All that readers from outside see reported is the bad news, and they form their impressions accordingly, and falsely. (I’m sure there is a term for this phenomenon, but I can’t remember it right now.)

Anyway, Karachi is a rocking city. Lahore also rocked, in a different way. Fun has come to Pakistan and found many cousins. Revelry, for example. Excuse me while I escort them somewhere.
amit varma, 8:52 PM| write to me | permalink | homepage