This post is about the second part of an afternoon of qawwali music at the shrine of Data Ganj Bakhsh Hajveri, where I’d gone with friends from NDTV who were shooting a feature on it. The first part is here.

As I wander around the hall listening to the music, I get chatting with a gentleman named Badar Ali Khan, a qawwali singer with matinee idol looks. He invites me to chat with him and his troupe, and we sit down on the floor in a semi-circle. He orders tea for me. 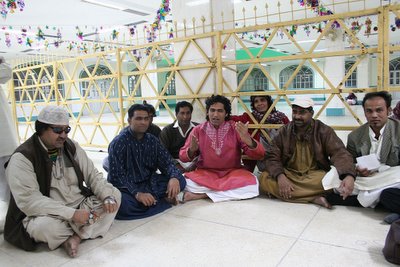 Badar was, you could say if you like cliches, born to qawwali. His forefathers sang qawwali in Jalandhar, and his uncle, Arshad Ali Achhen Main, and his father, Ilyas Ali Khan, were both accomplished singers.

“I started learning qawwali when I was very young,” he tells me. “It is the first thing I remembered learning.” Earlier, while taking pictures, I’d seen another kid on stage who was probably going through that same process. Here: 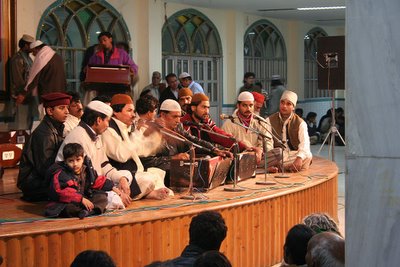 “So why do you come here to perform?” I ask Badar.

“Well, firstly I meet all my friends and fellow artists,” he says. “Also, a lot of concert promoters and so on come here, and they sign up people they are impressed with.

“And the audience,” he continues, “they are mostly people who can’t afford to listen to qawwali music in their own homes, so they come here.”

“Have you made any recordings of your own?” I ask.

“Oh yes,” he says. “You can get them at the store outside. [I tried later and couldn’t.] I have also done fusion recording with a Japanese artist named Takuya.”

“Do you know what is so special about Badar saab?” says a member of his troupe. “Every song he sings is composed by him. He only sings his own songs.”

Badar nods proudly. “I have composed between 100 to 200 songs so far,” he says. But making a living still isn’t easy, so he also gives music lessons – how to play tabla, harmonium etc – to foreign students, most of them backpackers who stay with Malik.

“Now take my photo,” he says. I get into position with my camera, and he poses, as if he's singing. I take pictures for a couple of minutes, and he maintains the pose in most of them. At first I find it slightly funny, but then it just seems poignant: that he should feel the need to sell himself like this. 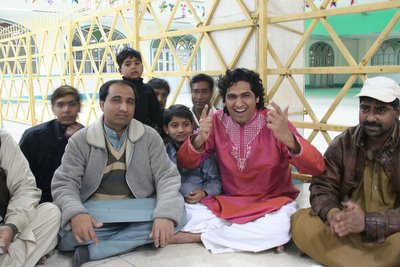 By the end of the conversation Swati has joined us. Her story acquires a focal point, and she asks Badar out to take some soundbytes. He agrees, we go out, and she chats with him as Furqan sets up his camera, to get a sense of what to speak to him about, and to put him at ease. When he speaks on camera, he is superbly articulate and confident. If he sings as well as he presents himself, we agree, he can be quite a star. 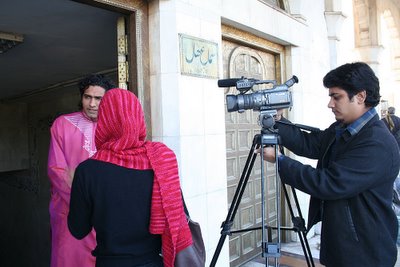 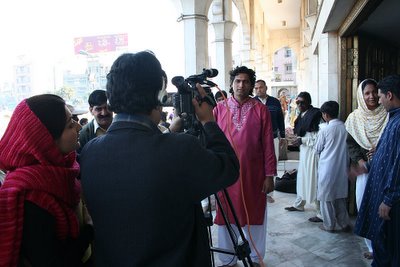 Badar is due to perform soon, so we wait around eagerly. Soon, he goes on stage, and Furqan gets into position. 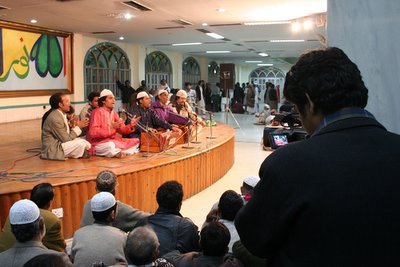 Badar sings with a lot of energy, and his group is pretty good as well, and, of course, he sings his own compositions. I’m no expert in this kind of music, so I won’t comment on his singing, but the man certainly has stage presence. 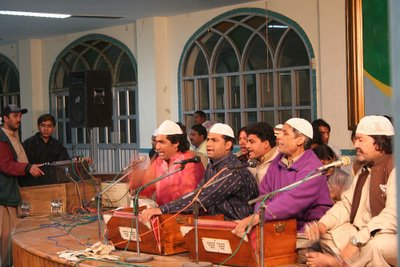 Finally we’re done. Swati checks out the footage Furqan has shot, and likes what she sees. Or maybe the content smile on her face comes because she is thinking of food. None of us have had lunch, so off we go to get ourselves a meal. And to prepare for the Sufi night ahead. (Update: An account of that is here.) 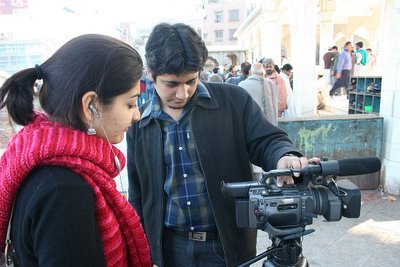